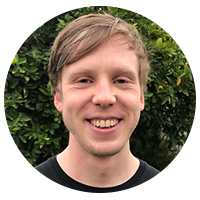 Hugh has experience delivering cognitive bias modification (CBM) training to alcohol and methamphetamine dependent populations across a number of withdrawal treatment settings in Melbourne, and he is interested in the development of novel neurocognitive and pharmacological treatments for addiction.

In his current role, he is involved in the development and trialling of a novel cognitive bias modification smartphone app called the “approach-avoidance training app”, or “AAT-App”, for short. He is also working on an NHMRC-funded clinical trial which aims to test the effectiveness of vaporised nicotine devices for smoking cessation among substance-dependent populations. Hugh has written and co-authored a number of papers on neurocognitive interventions and smoking cessation, accruing over 50 citations in the past two years of his career.